You must keep moving ... 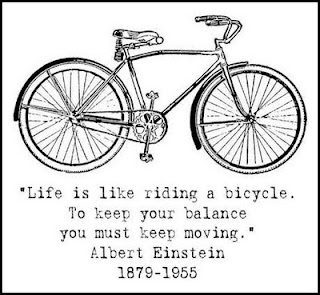 Email ThisBlogThis!Share to TwitterShare to FacebookShare to Pinterest
Labels: Albert Einstein, inspiration in January, keep moving forward, life is like riding a bicycle, the beginning of a new year

Can you teach me to skate backwards? 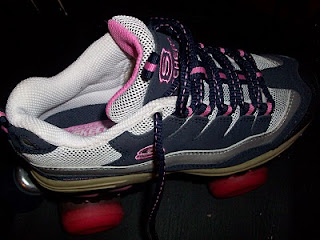 On New Year’s Eve my family and I went skating at our local skating rink. We go skating once a year and it’s always on New Year’s Eve. It’s become a tradition! Some years, the rink is packed and you can hardly move. This was not one of those years.
It snowed and the weather outside was frightful (and so were the roads). I can only assume this is why the skating numbers were low this year.
Let’s set the scene. To my right – middle school teens that had been dropped off without parents to welcome in 2010 with their friends and new inline skates they received at Christmas. In the middle us – a family of 4 (missing our oldest who chose to go to a friend party instead of skate with Mom, Dad, little sister and little brother) He was missed. To my left the elementary kids ranging from pre kindergarten to the 5th grade most were without adults. Almost everyone was wearing inline skates. That’s the cool thing now!
I believe my husband and I were the oldest skaters on the floor! I couldn’t help but notice all the really fast, talented skaters zooming around and was totally in AWE at the talent surrounding me. It was girl’s only skate (do you remember that from the 5th grade?) Me too – only I was skating with all the 5th graders and thinking Hmmmmm this brings back memories and my mind started to drift back to days long gone when I was their age. My thoughts were interrupted by a girl (probably age 10 or 11) who grabbed my arm and said – “Can you teach me to skate backwards?” I was a little taken back because I couldn’t believe she chose me out of all the fast, hipper skaters. So I said – “Yes, let’s get off to the side.”
Before I knew it I had a few girls around me all wanting to learn how to skate backwards! I started laughing and said: “Girls, I learned to skate back in the 80’s and inline skates hadn’t been invented yet.”
I then pointed to my skates and said: “These were in style back then!” They all laughed because I was the only one in the place wearing pink wheeled tennis shoe skates. Maybe they made me look like a backward skating expert?!
Nevertheless, I tried to teach them and made a few new friends. It was a great way to spend the last few hours of 2009. To you girls who want to skate backwards – keep practicing! You’ll get it…
What I know for sure: We all have something we know and can share… This year – reach out and share what you know with those around you. And don’t be afraid to ask someone (even a stranger skating around on pink wheels) to teach you something you’ve always wanted to try ...
Happy 2010 - cheers to skating backwards and forward! :)
Posted by Wendy Christensen at 9:25 PM 4 comments:

Email ThisBlogThis!Share to TwitterShare to FacebookShare to Pinterest
Labels: can you teach me to skate backwards, inline skates, roller skating on new year's eve, we all have something we know and can share
Newer Posts Older Posts Home
Subscribe to: Posts (Atom)