The Secret life of Walter Mitty - 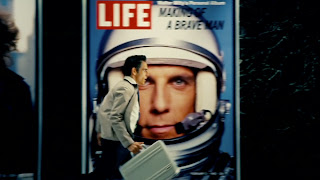 The last movie I saw in 2013 turned out to be my favorite of the entire year.  The movie - starring Ben Stiller was really quite amazing and it surprised me how much I liked it. I laughed really hard on the shark scene. I was moved by the ‘Major Tom’ singing moment when Walter jumps into the airplane and mostly, I was inspired by the movie’s message.

Don’t all of us have dreams and hopes we wish to accomplish? Don’t we all have something that stops us from taking the risks and achieving the ‘deep down desires’ of our hearts?

This year, I’m making some of those deep down dreams become REAL. And if it takes me singing ‘Major Tom’ out loud to do it – I’ll do it…!

Cheers to ground control and jumping into the unknown!

Email ThisBlogThis!Share to TwitterShare to FacebookShare to Pinterest
Labels: Ben Stiller, best movie of 2013, Dreams matter, Ground Control to Major Tom, Happy 2014, Jumping into the unknown, just do it, Space Oddity by David Bowie, The secret life of Walter Mitty